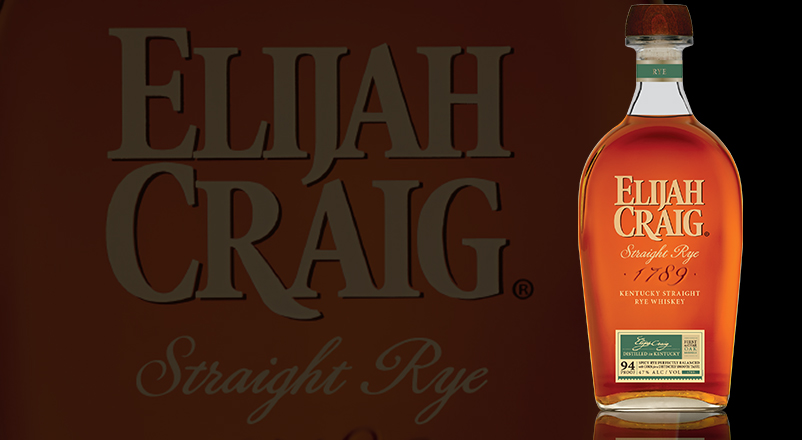 Elijah Craig Rye is made as a traditional American Straight Rye Whiskey with 51% rye, 35% corn and 14% malted barley. This combination of grains, which relies heavily on corn as the secondary grain rather than a higher percentage of rye, has been the primary Rye mashbill used by Kentucky Bourbon distilleries since taking over virtually all American Rye production post-Prohibition; the same mashbill directly responsible for the Rye resurgence seen today. Extra-aging is a tenet of the Elijah Craig portfolio, and Elijah Craig Rye is no exception. The resulting taste carries a spicy sharpness from the rye balanced with sweetness from the corn. Packaged in the iconic Elijah Craig bottle, the Straight Rye is distinguished by new bottle decoration, face, side and neck labels with green features.

Heaven Hill Distillery’s 84-year history of distilling and its 1.6 million barrel inventory of aging American Whiskey has allowed for the regular production of major styles of American Whiskey, such as Rye, even as they were out of vogue with consumers. These years of steadfast attention to detail give Elijah Craig Kentucky Straight Rye Whiskey, as well as the Elijah Craig Bourbons, the right balance of flavor and smoothness.

With an SRP of $29.99, Elijah Craig Kentucky Straight Rye Whiskey will first launch in the limited markets of North Carolina, South Carolina, Georgia and Oregon in January 2020.

First brought to market in 1986, Heaven Hill Distillery’s Master Distillers were selecting a small number of barrels of the finest Bourbon to make Elijah Craig Small Batch long before the term “small batch” even existed. It is this attention to detail and superb craftsmanship that give Elijah Craig an ideal balance of age, robust body and rich flavor. The Elijah Craig accolades have included Whisky Advocate’s Whisky of the Year, Best Small Batch Bourbon and Double Gold at the San Francisco World Spirits Competition, and Excellent Highly Recommended honors at the Ultimate Spirits Challenge. For more information, please visit www.elijahcraig.com.