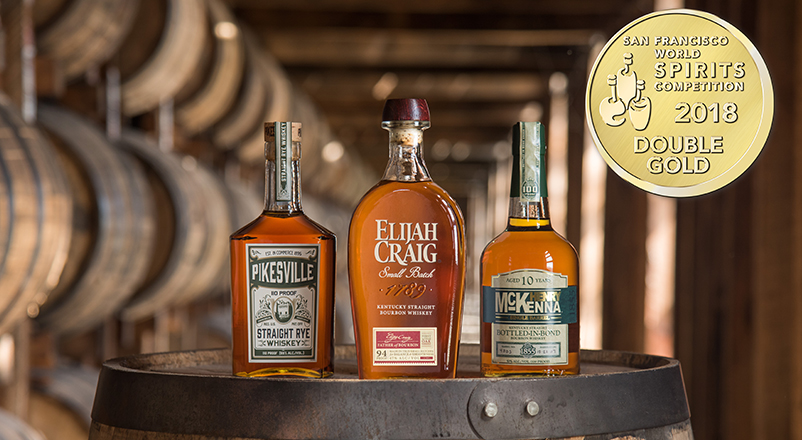 Both Bourbons and Pikesville Straight Rye Whiskey also received the Double Gold designation, which the competition defines as “awarded to the very few entries that receive a Gold medal rating by all members of the judging panel; these are among the finest products in the world.” This recognition comes on the heels of a banner award year for Heaven Hill Distillery. At the 2018 WSWA Spirits Tasting Competition Elijah Craig Small Batch was named “Best of Show Bourbon” and Pikesville was named “Best of Show American Rye Whiskey,” both receiving Double Golds. Elijah Craig Barrel Proof received the 2017 Whisky Advocate “Whisky of the Year” award, was named a 2018 Ultimate Spirits Competition Finalist and previously won Best Small Batch Bourbon in the 2017 San Francisco World Spirits Competition. The World Whiskies Awards named Bernheim Wheat Whiskey, Elijah Craig Barrel Proof, and Pikesville Rye their respective category winners for 2017.

“Heaven Hill Distillery’s pedigree of producing Bourbons and whiskeys with award-winning flavor is a tale of more than 80 years of family passion,” said Heaven Hill President Max L. Shapira.  “Parker Beam’s favorite two words were ‘quality’ and ‘consistency,’ and we are proud to see that tradition carried on through the work of our Master Distiller Denny Potter and all that help bring the product to life. We don’t make whiskey to win awards, but it certainly helps validate all that we do here to make our American Whiskey the best way that we know how.”

The San Francisco Spirits Competition was founded in 2000 and has become a premiere tasting competition grounded in integrity and experience. All spirits are tasted over four days through a controlled blind tasting by expert panelists. No information on producer or price point is given out prior to tastings to ensure each is judged fairly and without bias. For insight on the judging process, Fred Minnick, Wall Street Journal best-selling author, chronicled Henry McKenna’s path to Best Bourbon on his blog here. For more information on the San Francisco Spirits Competition, check out the website at https://sfspiritscomp.com/, as well as the August 2018 issue of the Tasting Panel Magazine.